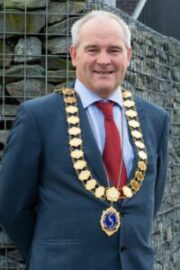 The new Chairperson, Councillor Maxwell has been a member of the Management Board since 2015. In his acceptance statement, he thanked his proposers and said that it was a privilege to have been elected to the role of leading ICBAN in the next year. He highlighted that a key priority for the cross-border organisation would be to secure funding for projects that will benefit all communities of this border region. Councillor Maxwell said that the past year has been difficult due to the ongoing pandemic and challenges associated with Brexit. He also commended his predecessor, Councillor Eamon McNeill of Armagh City, Banbridge and Craigavon Borough Council for leading ICBAN in the past year in what were challenging times.

Councillor Maxwell remarked, “ICBAN has been a network for elected representatives to come together on a regional and cross-border basis for the past 26 years. It is imperative that this collaboration continues, and the Framework of Regional Priorities strategy sets the focus over the next number of years. The times we are in are unprecedented and cooperation across the border is needed more so now, than ever. I look forward to a productive year ahead and hope that 2022 will bring greater stability for our communities and the region”.

In his statement, the outgoing Chairperson, Councillor McNeill congratulated the new Chair and Vice-Chair and noted that despite the pandemic, significant progress on various initiatives has been achieved in the past year. The strategy initiative, ‘The Framework of Regional Priorities 2021-27’ was launched in March, and discussions with key stakeholders have taken place to progress key identified projects. The two EU projects ‘Spot-lit’ and ‘Digi-2-Market’ are progressing and as these near completion the outcomes and results of these international initiatives are being realised.

‘The Border after Brexit’ research report authored by Professor Katy Hayward and Dr. Milena Komarova of Queen’s University Belfast was launched in October. The report examines the impact of Brexit and the Protocol on those living and working in the Central Border Region and aims to give a voice to those communities. Councillor McNeill concluded by wishing Councillor Maxwell and Councillor Nicholson well in their roles in the year ahead.