Navigating the challenges in cross-border cooperation

Border Transition is the latest innovative project to receive support from the Department of Foreign Affairs’ Reconciliation Fund.

These initiatives enable ICBAN and stakeholders to focus on the challenges of a changing environment. The projects promote peace and reconciliation and help build positive linkages between both jurisdictions on the island.  They each focus on particular macro-challenges such as climate change, Brexit, economic shocks and political changes, and which require organisations such as ICBAN to react and respond accordingly.

A new community development initiative with a focus on climate change is being developed for the communities in and around both Upper and Lower Lough MacNean. Six communities will be involved, covering both sides of the border in Cavan, Leitrim and Fermanagh, and from both main traditions: Belcoo, Blacklion, Cashel, Glenfarne, Killesher and Kiltyclogher. 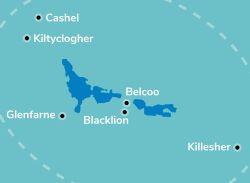 For this initiative ICBAN will be teaming up with Tasc, the think tank for action on social change based in Dublin, which has been running other successful Peoples Transition initiatives. The project is an exciting opportunity for border citizens to communicate the local issues they feel are most pressing, and then receive expert support and guidance to develop solutions that promote community wealth and well-being, whilst being climate / environment friendly.

Tackling climate change as individuals is often daunting and we don’t tend to see the long terms benefits of our actions. So, the idea of Border Transition is that by acting collectively across borders and generations, our responses as communities to climate change are more effective and achievable. People at the moment have plenty to think about already, in terms of the cost of living and other issues as we come out of the pandemic. We therefore want to impress that action on Climate is really an opportunity, and not a burden. It’s also an opportunity to make the beautiful environment around Lough MacNean even more attractive and accessible for local people and tourists.

Participation involves coming to some discussions, which bring together the various communities in the Lough MacNean area. These are likely to be held between April and June. During these the key local issues can be identified, aired and shared. ICBAN and Tasc will enlist the help of participants to construct a detailed picture of the issues, needs and demographics of the areas (conducted by survey) to ensure that we have not missed any specific issues or omitted to engage with any section of the local communities. Through analysis and discussion these will give rise to potential solutions that can be set in the form of a vision for the area, and this can then be readied for bringing to potential funders and relevant stakeholders. This will consider opportunities to create more sustainable local jobs for our young people, and indeed people of all ages. It is the communities themselves who will decide what the issues are, and we, ICBAN and Tasc, will help them find their solutions A programme timetable is currently being finalised.

ICBAN and Tasc are welcoming expressions of interest from local people who would like to become involved in the project. Anyone from the area of Lough MacNean, and the communities in the vicinity, including Belcoo, Blacklion, Cashel, Glenfarne, Killesher and Kiltyclogher, who is interested in finding out more, and about how they can play a role, is invited to send an email with their name and local community area to Project Coordinator, Andy Hallewell at andy@icban.com or by calling 028/048 66340710.

A project flyer and press release have been produced and updates will be regularly provided between now and the project closure in autumn 2022.

Border Catalyst is the fourth in a series of research projects between ICBAN and Queen’s University Belfast on the impacts of Brexit on border region communities.

The partners provided the opportunity for the widest possible group of people living or working in the Central Border Region to air their voices on the impact of Brexit and the Protocol. Views from younger and older people, and women were encouraged

Working with a small team from Queen’s University Belfast, the Border Catalyst Project will gather responses from the widest possible group of people living or working in the Central Border Region on the impact of Brexit and the Protocol. Views from younger and older people, and women are particularly welcomed. The purpose of the study is to create an opportunity for the voices of local people on both sides of the border to be heard.

From the first week in January 2021, QUB conducted a ‘temperature gauge’ on Brexit and the Protocol in which they kept track of relevant media stories and events across these islands. This formed the basis of a Blog every six weeks, which summarised the main stories and occurrences. There were four Blogs for each of the following weeks: 1-5, 6-12, 13-18, and 19-25.

‘The Border after Brexit’ report was released on 22nd October 2021 and can be accessed here.

The initiative provides an opportunity to build upon the outcomes of the 2018 Border Compass Project and has two key project elements.

This will be the third study completed between ICBAN and Queen’s University Belfast. This latest project provides a voice for border region residents and works on the impacts of Brexit on everyday life and the potential for a ‘No Deal’ Brexit scenario. The initiative included an online survey, focus groups and engagements with key stakeholders. The final report ‘The Border into Brexit’ was published in December 2019.

The ‘Border Compass’ Project had highlighted that there was a renewed commitment to continued cross-border cooperation by local authorities and other stakeholders to help deal with the challenges of our time. ‘Border Navigator’ now provides opportunities for these stakeholders to come together and focus on the most important strategic development opportunities and challenges. ICBAN will be working closely with the International Centre for Local and Regional Development (ICLRD) on this project element – a key element of which will be the production of a new ‘Strategic Action Plan for the Central Border Region’.

The Border Compass Project has also had a series of elements, which required collaborative working between different project partners.

‘Brexit at the Border’ study

‘Brexit at the Border’ was a study in partnership with Queen’s University Belfast and was published in June 2018. The study built on the work of the 2016 research initiative with QUB – ‘Bordering on Brexit’. The study gave a voice to border citizens and undertook to record those voices – through both an online survey which received almost 600 responses and a series of focus groups with 49 participants from across the Central Border Region. The resultant report highlighted the hopes and fears of border citizens in a post-Brexit world and the overriding need to return to protect a hard won and valued peace.

ICBAN ensured those voices were heard by disseminating the resultant report to those involved in high-level negotiations, including the EU’s negotiating team and the UK and Irish Governments. To date, the study has been referenced in over 120 media publications worldwide and a research video was also produced.

The Youthful Voices initiative was delivered with Verbal Arts. The focus of the work was with 14-17 year olds – those who were unable to vote in the Referendum: by virtue of age or jurisdiction. Throughput the duration of the Youthful Voices programme, 54 Reading Room workshops were delivered to 29 young people. A two-day residential was held in Donegal which enabled some intensive discussion sessions, as well as some outdoor activities to encourage the breaking down of barriers. In November a ‘Top Table’ type event was organised which gave young people the opportunity to question local Councillors, MLAs, MPs and TDs on issues pertinent to them. The Youthful Voices programme resulted in a number of young people gaining an OCN Level 3 Accreditation as a Peer Facilitator, which will enable them to deliver the programme to other young people, as ‘Cross-Border Champions’.

A short digital film of the Youthful Voices programme was produced, capturing the enthusiasm and aspirations of young people living in this border area.

‘Looking Beyond Our Borders’

This element focussed on the experience and learning from other border regions of Europe to help counter the consequences of returning to a back-to-back development as a potential consequence of Brexit. The paper examines strategies, models and solutions from other border regions of Europe, where one area within the EU adjoins another area outside of the EU. It explores some of the incentives for cooperation across borders in a changing environment. The report is authored by Mr Martín Guillermo-Ramírez of the Association of European Border Regions and includes case studies from different regions with an EU and non-EU interface.

The aim of the Sustainable Solutions element of the project was to bring together the learning and the outputs of the various elements referenced above into a set of tangible and long-lasting solutions to the challenges facing the Central Border Region. Three Sustainable Solutions workshops were held, with 53 participants attending. These included a workshop between Senior Council Officers and elected representatives on the Board of ICBAN, a session between Community Planning Coordinators from across the area, and a ‘Top Table’ type event which gave young people the opportunity to question local Councillors, MLAs, MPs and TDs on issues pertinent to them.

ICBAN has also produced a Community Planning Mapping document covering the eight Member Council areas. This document has been shared and refined with Community Planners and developed as a resource to inform future cross-border planning and activities.

The need for continued cross-border cooperation was highlighted as a priority as part of a renewed commitment given to future collaboration. Discussions are underway to devise the most appropriate mechanism to enhance the involvement of both the executive and democratic functions of local government in working together through the cross-border partnership.

The Border Compass Final Conference event on ‘The Future of Cross Border Cooperation’ was held in the Slieve Russell Hotel, County Cavan on 30 November 2018. Mr. Breandán Ó Caoimh (Research Affiliate of the International Centre for Local and Regional Development – ICLRD) chaired and facilitated the gathering. 70 delegates attended; with all eight Member Councils of the ICBAN Partnership represented. The key theme was that the challenges facing cross-border cooperation will require concerted efforts across the entire border corridor area. The conference featured several inspiring Case Studies in Cross-Border Cooperation including the UNESCO Global Geopark initiative between Fermanagh & Omagh District Council and Cavan County Council, and work on ‘Developing a Statement of Cooperation on Planning’ by Mid Ulster District Council and Monaghan County Council. The panel session saw questions and answers to stakeholders from across the Region on facets of cross-border cooperation, including, community safety, well-being, maintaining current employment levels and the environment. Presentations from the event are available in ICBAN’s online Library.